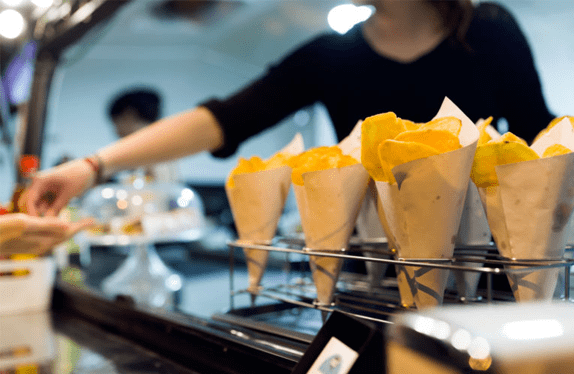 Talking about the key success in the culinary business, there are 2 (two) things to be considered by all businessmen, namely ‘unique and innovative brand’ and ‘service standardization’. Without these two things, culinary business will never be able to develop optimally.

In order for potential customers to come and want to try the food you sell, then a brand should look ‘interesting’. Some factors that can make a culinary brand to be interesting include: unique interior, the type of food that makes curious, how to serve a typical food, and many other things that can be developed into a uniqueness. Besides being unique, a culinary brand must also always innovate – both in terms of food and how to serve.

There are many things that should be standardized so that the culinary business can grow fast and provide good results for the businessmen. Some standards that must be considered, among others: service quality, cleanliness, employee appearance, how to communicate to customers, quality and taste, and other supporting aspects, for instance, atmosphere, music and many other things.

There is an interesting story that I want to share with you. Last week, I ate at a Japanese restaurant with my family. I chose the restaurant because the ramen that they sold has a good taste and a cozy restaurant atmosphere. This is my third time with my family to eat at that restaurant. When I came the first and second time, I still feel satisfied. But when the last time I came to that restaurant, I was really disappointed and finally decided not to come again to that restaurant. This is the full story: At that time, the restaurant was not crowded. My family and I have ordered food and drinks which was assisted by a waiter. After we were waiting for about 15 minutes, the food was finally delivered to the table by way of presentation which made me less interested in eating. The waiter’s finger with an unkempt nail goes inside the bowl which contains the ramen. The food which was served also did not match my order. Of course, I asked why the food I ordered was wrong and the waiter simply replied ‘it is so’. And a few moments later, I heard the waiter and the cook were arguing my order. At that time, there was the owner/ manager who was in the restaurant (was busy making reports with his computer) but pretended not to know about my complaint. My food was not replaced and there was no apology from the restaurant.

Many things can be analyzed from the incident that I experienced, which is the waiter is not properly trained to serve the customer; standard of appearance and cleanliness of waiter also was never been paid attention; non-standardized order recording method which causes wrong communication to the kitchen; owner/ manager who does not understand in handling the complaint; and many others.

From the above incidents, I can conclude that the restaurant does not have any Standard Operating Procedures (SOP) or may already have SOPs but it is never well-socialized to all employees.

If the owner of the restaurant above does not immediately rise and make changes, it can be confirmed that the restaurant will soon be out of business because it would be left by disappointed customers.

My message for the businessmen is to make a good and correct SOP immediately for your business to be able to run better and be able to provide satisfaction to the customer. Therefore, the culinary business that you manage will be able to compete in the midst of increasingly fierce competition.